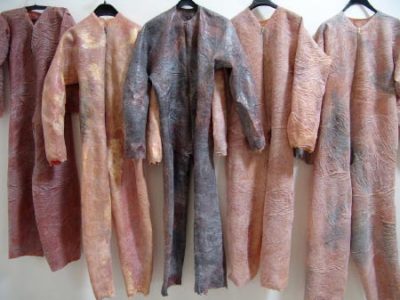 A dead artist is a bankable artist

This is a guest post by Caleb J Ross as part of his Stranger Will Tour for Strange blog tour. He will be guest-posting beginning with the release of his novel Stranger Will in March 2011 to the release of his second novel, I Didn’t Mean to Be Kevin and novella, As a Machine and Parts, in November 2011. To be a groupie and follow this tour,subscribe to the Caleb J Ross blog RSS feed. Follow him on Twitter: @calebjross.com. Friend him on Facebook: Facebook.com/rosscaleb

Chuck Palahniuk’s short story, “Ambition,” explores the strange practice of paying for human life. This isn’t a back-alley, black market exchange I’m referring to, but is instead a morally acceptable and commercially validated activity promoted via high-stakes art auctions. Though the physical transaction of blood for money isn’t directly acknowledged, the fact stands that work by deceased artists opens wallets wider than those by living artists. The work stays this same; the story of the work changes, irreversibly.

Story as a commodity. It’s something we generally think of in tangible terms—a book, a movie, a video game—but we aren’t as consciously aware of the value-added benefit of story when the main object of sale isn’t one presented strictly as a narrative vehicle. Pawn shops, the aforementioned art auctions, and one of my more recent addictions, the Discovery Channel show Oddities, all traffic in story. These business people are aware of the importance of story, even if their customers aren’t. Catholicism has for centuries been taking offerings in exchange for prayers and proximity to blessed relics. Museums do the same thing.

Significant Objects, since 2009 (but is now on hiatus…booooooo!), has traveled perhaps the most creative, yet direct, route to commoditizing story. They take an ordinary object and inject monetary value into it by literally creating a story with the object as its subject. But what about those of us interested only in the intangible story. What about the museum goers of us, the fashionistas with a penchant for the extravagant entrance, or the simple tattoo lover? There are, respectively, the Bodies Exhibition, clothing designed to look like human skin, and a book bound in tattooed human skin.

Jackson Jacoby, the protagonist in my upcoming novel, I Didn’t Mean to Be Kevin, share a business ethos with the latter crowd. On the way to visit his “mother” (quotations intentional), Jackson takes every opportunity to talk about an underground human appendage trade which may or may not exist. To Jackson, knowing that the trade exists isn’t nearly as important as getting people to believe that it does. Why? For validation, for the chance to be throned by one of his own stories.

Why is story so collectible, so sought after, even when we don’t realize it?